Art: Old Drawings That Do Turn Up 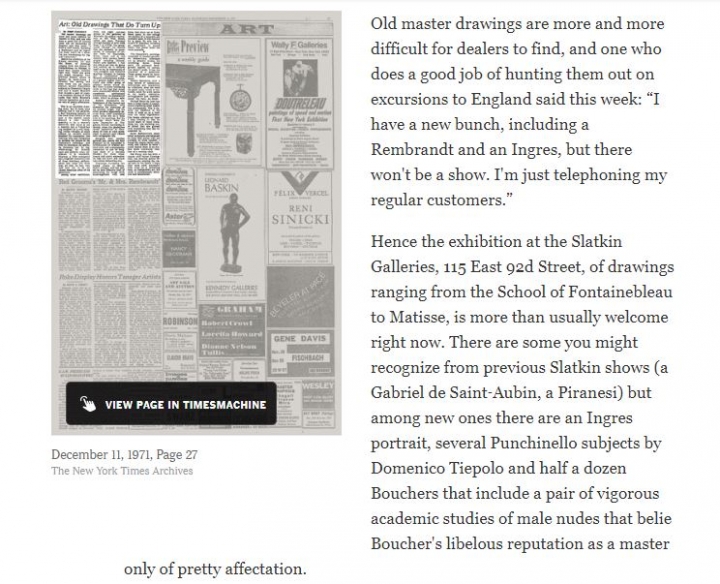 Old master drawings are more and more difficult for dealers to find, and one who does a good job of hunting them out on excursions to England said this week: “I have a new bunch, including a Rembrandt and an Ingres, but there won’t be a show. I’m just telephoning my regular customers.”

Hence the exhibition at the Slatkin Galleries, 115 East 92d Street, of drawings ranging from the School of Fontainebleau to Matisse, is more than usually welcome right now. There are some you might recognize from previous Slatkin shows (a Gabriel de Saint Aubin, a Piranesi) but among new ones there are an Ingres portrait, several Punchinello subjects by Domenico Tiepolo and half a dozen Bouchers that include a pair of vigorous academic studies of male nudes that belie Boucher’s libelous reputation as a master only of pretty affectation.

This is an excellent drawing show, but if there were nothing else in the galleries, a Saul Steinberg tapestry on the lower floor (which in this case is the eighth) would demand a visit. Strictly speaking — by a weaver’s definition, that is—it is not a tapestry but a 7 by 9 foot rug designed as a wall hanging. Unlike virtually all other designs by modern artists intended for translation into weaving, this one recognizes in advance the nature of the craftsman’s technique. And with its odalisque, its sphinx, its Steinberg cat, its rugwithin a rug, its pictorial puns and esthetic cross references, it is wonderful, hilarious, a little outrageous and altogether masterly—one of those Steinberg performances that make you think that, all told, he may very well turn out to be the champ American artist of his generation.

Among other exhibitions, there are eight one man shows in the galleries at Westbeth, the artists community at 463 West Street, which are open Thursday through Sunday of each week from I to 6 P.M. The group, called “Monad” for reasons that can probably be ascertained, is composed of artists born in. Guatemala, Korea, Japan and in this country with various family origins including Chinese, Italian and Spanish. I was not able to see that the group was unified, as it declares itself to be, by expressions of “the energetic and reflective qualities inherent in Eastern art” in combination with Western contemporary styles, to a greater degree than virtually any other group of abstract artists would be. But there is some interesting work in this bag that mixes semi amateurish efforts with completely professional achievements. In alphabetical order, which is always safe:

Rodolfo Abularach’s enlargements of the human eye to the dimensions, with somewhat the character, of an archery target, and his other patterns apparently derived from other anatomical parts, strike me as a little trite in his paintings. But his drawings, which make the same impression at first glance, become fascinating at second, when the gradations reveal themselves as thousands of lines at once systematic in pattern and vibrant with calligraphic life.

Dongkuk Ahn, another genuine pro, paints the four elements in as successful a hybridization of oriental pictoral style and contemporary mannerism as can be imagined. (Sort of a one man Monad.) For sheer visual beauty and poetic expression he tops the show and could top a more demanding one.

Yoshishige Furukawa has looked closely at MarcaRelli’s collages, and has added his own effective trick of puncturing his rough cloth stuck‐togethers with neat holes that show up as lively black spots. In one collage the eyelets of a tarpaulin are similarly used. In this manner he is good. He also has a couple of disasters, including an experiment in waved fabric. His prices make his work available.

Vito Giacalone’s paintings, composed of banded geometric intersections, impressed me as detailed studies for something better. Silver paint, his universal background applied to canvas, just doesn’t work. It has the character of a substitute. These panels would be handsome in baked enamel on metal.

Minoru Kawabata, with long record of exhibitions, fellowships and acquisition by collectors, does not need my good word, which is fortunate, since his work seems to me totally indecisive, unimaginative and unprofessional. My fault, no doubt.

Michael Ponce de Leon has been a noted leader in experiments combining other media into printmaking. This is exactly my objection to his work. It ends up as a hash with too many ingredients. One keeps wishing—at least I keep wishing — that he would learn to leave something out, just anything out, of prints that are glutted with everything that can be crammed in.

Jacob Rabinowitz’s sheet metal sculptures are balanced to sway and waver with air currents, or when touched. found the shapes rather awkward, and indoors by hand could inspire them to no motion more interesting than that of a rocking chair.

Mel Wong, who has been a dancer with Merce Cunningham, has received grants, for experiments relating the visual arts to the dance. I hope they were more successful than what he is exhibiting here. As independent art, his work is unredeemedly imitative and amateurish.

The TimesMachine archive viewer is a subscriber-only feature. We are continually improving the quality of our text archives. Please send feedback, error reports, and suggestions to archive_feedback@nytimes.com.

A version of this archives appears in print on December 11, 1971, on Page 27 of the New York edition with the headline: Art: Old Drawings That Do Turn Up.